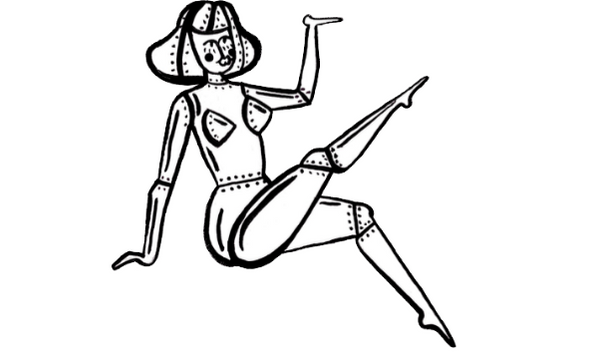 
Warning: pay close attention to punctuation, readers. I erroneously read the title of journalist Jenny Kleeman’s book as sex, robots and vegan meat. Only later did I realise I had imagined the comma between sex and robots. Sex Robots & Vegan Meat is a deep dive into four fast-developing industries: sex dolls, and the latest tech developing in artificial meat, as well as the business of birth and death.

Kleeman dives in with sex dolls, meeting the industry’s most recent spawn: the machine-learning sex robot - which she finds (accurately) to be highly misogynistic. But in fact sex robots turn out to be the least surprising technological endeavour in this book…

One of the most shocking is the advancement of ectogenesis. You’d be forgiven for not knowing that this means foetal development outside of the uterus, i.e. artificial wombs.

Another is the rise of death machines: even the staunchest advocate for euthanasia will get a chill from reading about an imminent 3D-print-at-home device named ‘Sarco’ (short for sarcophagus). Sarco is a detachable capsule mounted on a stand that contains a canister of liquid nitrogen, enabling death by suicide through inert gas asphyxiation.

This is where Kleeman falters slightly. Despite the book filling 500 pages, there’s no room for a forensic investigation of each industry. Her method is to identify the most audacious innovators in each sector, which makes for a thrilling read, but it does mean the book’s scope is limited to only the most extreme and alarming precipices. And it is well known that the loudest voices rarely come out with the best ideas. It would have invited a more complex discussion had tech companies with more modest aims been incorporated in the study.

All four of these industries appear to have an ugly, misogynistic ‘creative savant’ at the steering wheel. A man concerned with both reputation and profit, no longer asking what he should create, rather jumping straight to ask what it is possible to create. For example, visiting Abyss Creations in San Diego, Kleeman comes into first hand contact with their RealDoll, “the world’s most famous hyperrealistic sex doll”. Founder Matt McMullen dreams of creating a living, breathing sex robot – one that, creepily, caters to “every man’s needs”.

Kleeman’s interview style is unusually blunt. A high point is her question to McMullen “Are you fine with people having a sex doll that looks like you?” when presented with his male doll that had features disarmingly reminiscent of McMullen’s own face. When confronting Mark Post, founder of clean meat start-up Mosa Meat and a professor of physiology, Kleeman asks: “Couldn’t this be driving us towards a world where we are relying on very specialised technology and corporations to produce our food where we were once self-sufficient?”

In both cases, her questions are met with meaningless corporate jargon. These ostensibly smart business owners are exposed as being wholly unable to engage in any sort of serious debate about the ethics of their industries.

The most valuable section is the one about birth – probably because Kleeman finally speaks to groups with wide-ranging stances. Pregnancy and birth are being opened up beyond the limits of the female womb. “Biobags” can gestate lamb embryos and provide the same nutrients that a biological sheep mother would via their amniotic fluid.

There is also an increasing appetite for social surrogacy, an opt-in surrogacy for healthy women who have non-medical reasons for not wanting to carry a child. Murkier than the comparatively benign biobag is a community project that pays homeless women to carry babies for couples looking for surrogates. Downright appalling are the “heterosexual male separatists” who pray and plan for the end of womankind.

It’s not just the obvious questions that Kleeman raises here. Should surrogacy be cheaper for mothers who are at risk? Should artificial meat be aimed at developing countries with food supply issues rather than Silicon Valley elites?

Kleeman has intentionally chosen subjects that are traditionally taboo, and services that are restricted to those with money. Will these developments really filter down into the rest of society? It is hard to say, but greater transparency is undoubtedly a positive thing. Kleeman’s book goes some way in sparking important conversations.