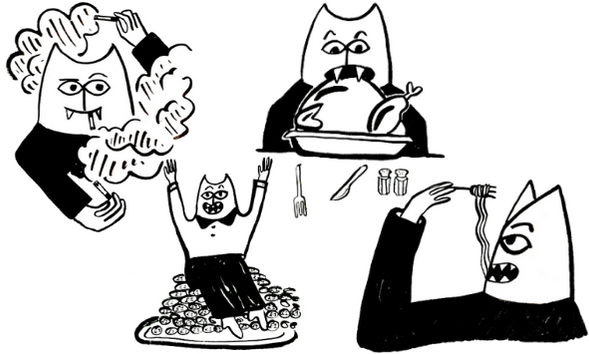 Playing a game of seven deadly sins led me to a realisation: in a world of restriction, surrendering to gluttony is an invigorating way out


A brief history of the seven sins

Three centuries after the birth of Christ, the man who was later to pen the earliest rendering of the deadly sins found himself in a pickle: he was hopelessly infatuated with a married woman.

What to do? He chose the most noble option: to flee the cosmopolitan capital of the Roman Empire (Constantinople), and head to a monastery in Jerusalem, destined to be his new home. Yet despite his noble intentions and self sacrifice, Evagrius Ponticus did not manage to instantly shed all of his personal flaws. Freshly settled in his new digs he soon earned himself a reputation for taking “special care of his dress” whilst “sauntering” around the Holy City of Jerusalem (in what’s been described, fairly or not, as a gross display of pride and vainglory).

Then something triggered another personal transformation. Following an illness, Ponticuse spent the last 14 years of his life living in extreme conditions. He ate once a day. He didn’t consume fruit, meat or vegetables. He didn’t cook any food, nor did he bathe. Unsurprisingly, his extreme diet ruined his digestive tract and it is suspected he suffered from urinary tract stones as a result. Worse still, he would sleep only for a third of a night and spent most of his waking hours in contemplation and prayer. What a life.

It was during this period spent as an ascetic monk that he came up with the genius idea of a list of traits which he called the “eight evil thoughts”: gluttony, lust, avarice, anger, sloth, sadness, vainglory and pride. Derived from biblical teachings, he considered these to be the vices that interfered worst with spiritual practice.

Evagrius Ponticus was not writing for the general religious public. It wasn’t until later that his ideas were disseminated to your average Holy Roman Empire-dwelling Christian. Another monk and student of his, John Cassian, became the one to spread the word to the Western Church.

What had been eight sins became seven, as pride was upgraded to be a sort of umbrella sin. Over the intervening centuries, religious experts have struggled to agree on the list. Pope Gregory removed sloth and added envy, for example. Thomas Acquinas reinstalled sloth but ditched sadness.

The idea that developed: if these sins are not actively avoided, they lead to the downfall of anyone unable to resist temptation. Committing a sin is deadly because it can result in the death of the soul. A dead soul will mean an eternity spent in hell.

As an ex-Mormon (in a piece I wrote for the last edition of this magazine you can suffer through a summary of my 18 years in the Church of the Latter Day Saints) I am all too familiar with the deadly sins. So in the midst of lockdown, fearing yet another round of a Buzzfeed What type of bread are you? quiz, I found myself shooting my flatmates the (admittedly asinine) question: which of the Seven Deadly Sins most encapsulates you?

The ensuing conversation led me to question the sins and the long shadow that restrictive behaviour has cast over our lives.

To refresh your memory, the established options are (in no particular order): pride, envy, greed, gluttony, lust, sloth and wrath. Only one of my flatmates knew their sin immediately. Incidentally, she was the sloth in our group. Likely she was too lazy to even consider another option.

Of course, as our formerly lust- and vanity-afflicted friend Evagrius Ponticus knew all too well, the unfortunate individual can suffer from a multitude of vices all at once. My flatmates’ initial indecision revealed that they regularly succumbed to the full range of vices on a daily basis. But it’s a time-honoured Christian tradition to find yourself in repeated battles with one sin in particular – so deciding on one was the aim of the game.

It can feel hard. But don’t think of them as ‘sins’. Instead, use the words to ask yourself how you react to problems or situations that have challenged you. For instance, picture this: you stealthily stash a Cadbury’s Crème Egg in a shared cupboard; you return to eat it later (an exercise in self-control) to find it has been brazenly scoffed by a trusted housemate (this is definitely not a true story). What would be your initial, emotionally-driven response? Envy might make you take something of theirs in retaliation. Pride would bring out the stubbornness in you, with the issue remaining an unspoken indiscretion, never to be aired out… Who knows what lust would make you do?! And wrath, well, such a feeling could result in a seething few days where a cold shoulder would be welcome relief from the burning hot rage fuelled by injustice.

Debates ensued. Which sin is the ‘worst’? Monologues dragged on: why someone thinks they are one sin over another. But what proved most interesting was identifying the benefits of some sins. Making the case for gluttony, my flatmates struggled to distinguish between the gluttonous and the greedy.

At their basic animalistic levels, greed and gluttony are similar: an insatiable desire for more. Biblical teachings defined them according to the object of desire: being “gluttonous with food” or “greedy for money”. These sins were between the individual and God. But the influence of religion on our everyday lives has diminished, and so these transgressions against God are now seen as less severe vices or merely bad habits.

The real difference between these two vices is in the location of their effects. Do they harm only the vice-ridden individual? Or do they have serious negative ramifications for those around them?

In the fifth century AD John Cassian defined gluttony as a lack of temperance or moderation. Contrary to general belief, this doesn’t implicitly entail selfishness. Gluttony is the desire to go beyond what is necessary. Even though one might indulge in more than they need, that does not necessarily mean they desire to take from another. An example could be when preparing a dinner to share with others, one may make enough to satisfy one’s own gluttonous ways, but would not continue to help themselves to the detriment of their guests. Being a glutton for punishment implies you bite off more than you can chew in areas such as relationships, careers, pastimes and even mental health. We may all have been in a position of pining after someone who is simply not interested, but gluttons are likely to find pleasure in this pain and extremity of emotion, and therefore angle for a repeat…

The glutton in us indulges in sad music when we are depressed. It longs for over-the-top displays of emotions. When it comes to work-life balance, gluttony can drive us into a wall when we know we should stop and take a break. There is something oddly satisfying about completely draining yourself out. Gluttony is taking things to the extreme whether it’s sports, academia or partying.

Greed takes from others

A greedy person would be described as selfish because they have at the expense of somebody else. The super-rich person may wish to further their wealth with no desire beyond accumulating an unnecessary fortune.

Besides the pursuit of gold, like gluttony, greed can manifest in relationships. It can mean dominating another’s time and life, always taking and never giving. In careers, ambition persuades you to aim higher and devour anything in your way. Greed can also influence actions irrespective of your own inclinations. When young children see others enjoying something, they instinctively want it themselves and will take it, with no thought as to whether it is something that they too will enjoy.

Taking for the sake of having is what defines greed. It is a behaviour fuelled by the feeling that you deserve something more than somebody else. Greed is calculated in its acquisition. A choice motivated by greed is made in relation to what someone else has. Greed, by default, directly affects others in a negative way. It is the difference between many thirsty trees gluttonously taking up water from the soil to thrive, and one parasitic plant greedily sucking up nutrients at the expense of its host.

Historically, gluttony had no place in the lives of devout Christian disciples. A lack of temperance or moderation was seen as a heinous sin because it meant favouring desires of the flesh over obedience to God.

But these days, that is not the world most of us live in. A wave of minimalism and moderation is sweeping Western society. Gen Z consumes less alcohol and smokes less than any previous generation of the modern era. The non-alcohol booze industry is booming. A huge number of people within the UK adhere to nutritional “rules”: 34% of us, apparently. Although these trends started before the pandemic, the restrictions on social living have, for some, amplified restrictive tendencies. When I look around me, I see people choosing not to live. Staying indoors, avoiding non-virtual realms, cutting out food groups. Environmental concern can motivate some of this behaviour, but can cross the line into excusing it.

My fear is that when restriction dictates how our lives are lived, we cut off the world and throw away the keys to life. Our lives are too often dominated by “can’t”s and “shouldn’t”s - even if we are not subscribers to the teachings of ascetic monks of yore. There is a pervasive belief in self-moderation, which impacts our lives and limits our passions. The glutton does not subscribe to self-regulation. The glutton sees life and thinks MORE!

That’s why I see it as my job to exult excess and indulgence. To be gluttonous means to be completely present in each moment and to take all that life has to offer. The liberation of pure indulgence is almost a mindful activity in a climate of anxiety. So allow me to formally introduce myself: my name is Thomas, and I am a proud glutton.